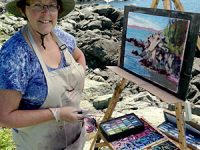 Betsy Payne Cook paints exclusively with pastels and is honored to be elected as a Juried Associate Member of the Pastel Society of America and to have achieved signature membership status in the Pastel Painters Society of Cape Cod. Betsy is also acknowledged as a Juried Master Artist at the Cape Cod Art Association. Betsy’s paintings depict her impressions of the landscape and its abundance of colors. She paints both en plein air and in her studio; and conveys her love of the outdoors in each painting. 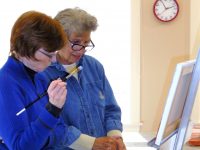 Terry Dunn received a B.A. from Massachusetts College of Art; MFA American University, Washington D.C. Ms. Dunn has over thirty years of teaching experience, retired to the Cape and continues to teach at the Falmouth Art Center. 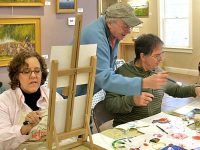 Dan Hanagan attended the School of the Museum of Fine Arts, Boston. He is a professional artist, art instructor, and curator. He is a former Board member of the Falmouth Art Center.

Andrew Kusmin teaches beginning to advanced watercolor classes. He has received numerous local and national awards. Andrew is a signature member of the National watercolor Society, Audubon Artists, Allied Artists of America, Southwest Watercolor Society and several others. He has a studio/gallery located in Plymouth. Andrew served four years as President of the New England Watercolor Society. He has been teaching for well over twenty years. 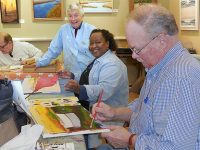 Claudia Smith-Jacobs received a B.A. from Boston University and a M.A.Ed from Lesley University. She has studied art in England and inFrance. In addition to winning the Romanos-Rizk fellowship given by theProvincetown Art Center Museum, she has also been awarded two MassArts grants, and was selected as Artist-in Residence by Les Amis de laGrande Vigne in Dinan, France.

Corrin Jussell  is a professional ceramicist working out of Hatch Street Studios in New Bedford, MA. She has recently graduated from the University of Massachusetts Dartmouth with a BFA in Ceramics, she recently completed a residency at Arch Contemporary Ceramics in addition to an assistantship at Peters Valley School of Craft. She teaches at the New Bedford Art Museum and the Falmouth Art Center. 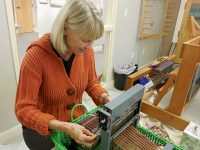 Christine Anderson, a weaver and fiber artist, finds the intersection of threads both basic and centering to her life. Her work includes intricate woven tapestries of local landscapes and conceptual work that combines weaving with mixed media, including scanned digital images, handmade paper, fabrics, and beads. Originally from New England, she completed a BS in Art from Cedar Crest College and a MFA in Fibers and Handmade Paper from East Tennessee State University.

Ed Chesnovitch is a Cape Cod based artist, a graduate of the Art Institute of Pittsburgh and has studied extensively at The Art Students League of New York, and the Cape Cod School of Art, Provincetown, Massachusetts. He is an elected Signature Member of the Pastel Society of America (PSA) in Gramercy Park, New York City, and a Signature Member of the Pastel Painters Society of Cape Cod. His work is included in both public and private collections throughout the United States and Europe. 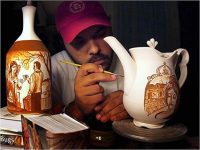 Seth Rainville is a professional potter, art educator, and independent curator living in New Bedford, Massachusetts. He has taught ceramics at multiple venues including the University of Massachusetts Dartmouth, South County Art Association, Arch Contemporary Ceramics, the Mesa Art Center and Phoenix Center for the Arts. He has also conducted over 30 workshops across the country including recent workshops at Harvard Ceramics, Mudflat Ceramics Studio, and at Watershed Center for the Ceramic Arts. Seth’s teaching style requires students to enjoy the process while learning a strong base of fundamentals. 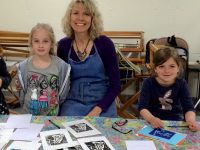 Susan Jensen has a B.S. in Art Education from The College of Saint Rose in Albany, NY, and an M.A. in Printmaking from San Jose State University. She was an art educator in Portland, Maine before joining the Falmouth Art Center in 2013. In her classes Susan incorporates lessons in which students can explore materials as they work on technique, perceptual abilities, and problem solving skills. She enjoys integrating art history, too, and strives to provide a nurturing environment that celebrates the student’s individuality and creativity.

Molly Henriksen Rowland recently returned to Falmouth after spending several years teaching in Natchez, Mississippi where she received the Mississippi Teacher Fellowship. While in Mississippi, Molly received her Masters of Education in Art from Mississippi College. There her focus of study was a combination of sculpture and art education. Molly also received her Bachelors of Fine Arts from the University of Massachusetts, Amherst in art education with a focus on painting and art history. Currently Molly is teaching art in Bourne, and lives in Falmouth with her husband and two children. Molly has many years of teaching experience and loves working with students of all ages. 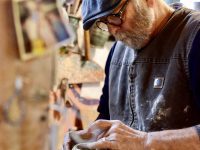 Hollis Engley was raised on Martha’s Vineyard, educated at Cape Cod Community College and Lycoming College in Pennsylvania and worked in journalism as a writer, photographer and editor for more than 25 years. He began making pots in 1990 at the Art League School in Alexandria, VA, and established Hatchville Pottery in Falmouth, MA, in 2000. He joined Kimberly Jane Sheerin at The Barn Pottery in Pocasset in 2014, where they make their individual and collaborative work.Hollis makes functional pots – “good pots for good food”. He is influenced by Japanese, Korean and English country pottery. He fires with both gas-fueled and wood-fueled kilns. 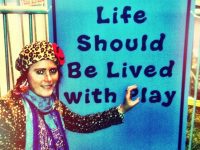 Kim Sheerin graduated in 1996 from the University of New Hampshire with a degree in Studio Arts with a focus in ceramics. She has lived and made pottery in Pocasset, Mass., on Cape Cod, for the past 20 years at The Barn Pottery on Barlow’s Landing Road. Kim makes functional pots – plates, mugs, cups, bowls, and teapots – what she calls “art for every day.” Her work is highly decorated with slip trailing, stamping and sgraffito. She is influenced by the natural world of Cape Cod and by Islamic and East Indian art. She has traveled to India to investigate human trafficking there and to see how young women are being rehabilitated from slavery. Her “pots with a purpose” educate the viewer on that issue. 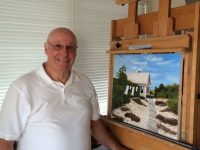 Bill Noble is a Juried and Exhibiting member of Oil Painters of America,the Cape Cod Art Center, South Cape Artists, and is a Lifetime Member of The Falmouth Art Center. He has won numerous awards and honors for his paintings. Bill has had seven one man shows including one in Europe and has two paintings in the permanent collection of Musee Yvonne Jean-Haffen in Dinan, France and a painting in the permanent collection of Cape Cod Five Bank, as well as many private collections. Billwas honored to be named Artist In Residence at La Grande Vigne, in Dinan, France in 2016. He is very proud to hold the title, Le Pensionnaire de l’Atelier des Artiste, Dinan, France. 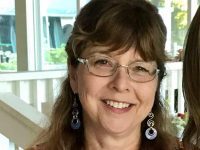 Alicia Buccino from Mount Holyoke College with a B.A. degree in Studio Art with a concentration in printmaking and photography. She also studied art history, drawing, painting, sculpture and bronze casting. A certified preschool teacher, she has over 20 years experience teaching art and photography to children ages pre-K to 12 in both public and private schools on the Cape, as well as summer art workshops at Falmouth Academy and The Cape Conservatory.

Ron Dean started making pottery in 1969 at the Clay Art Center in Port Chester, New York, where he also worked as studio manager and taught classes. Ron moved to Marstons Mills on Cape Cod in 1982, and built a studio while working as a production potter at a local pottery. Ron has led several workshops at Castle Hill in Truro.  In addition, Ron served as the principal potter at Plimoth Plantation for 12 years. He  has been teaching for over 20 years, including pottery classes at the Creative Arts Center in Chatham, and working to create innovative clay forms through his own studio. 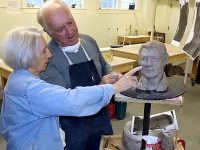 Robert Ryder received his first formal art training at the Museum School in Worcester after completing his residency in orthodontics. He devoted himself full time to art after retiring from his practice in the mid 1990’s. Bob is an active member of the Falmouth Art Center, the Cotuit Center for the Arts, the American Portrait Society, and the Cape Cod Art Association. Bob’s choice of media has been as varied as his choice of subject matter. He has been characterized as a realistic impressionist working in watercolor, acrylic, pastels and oils. Currently his focus has been three-dimensional.